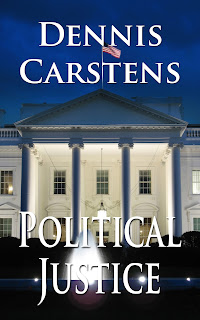 A politically ambitious couple will stop at nothing to obtain the presidency. He is a popular governor of a western state. A philanderer, but charming, good-looking, charismatic, a dream candidate. Thomas Jefferson Carver is a capable administrator and attracts sycophants like moths to a flame. People willing to sacrifice themselves and anyone who opposes him.  Darla Bunton Carver is the political brains behind their rise to power. Amoral and single-minded to the point of obsession it is her ambition to succeed her husband to become the first woman president of the United States. And nothing will stand in her way to achieve it. Including her husband’s numerous affairs, money scandals, homicide cover-ups, murder and even treason. Whatever is necessary. Their true goal? Power and wealth for themselves.

A Marc Kadella mystery, Political Justice can be read as a standalone or apart of the series. This book definitely had me wanting more, which made me not want to put the book down. I finished the book in a day and a half (due to having to go too work) but I can't wait till the next one comes out. I really liked how realistic the characters and story line became the further I got into Political Justice. I will definitely be reading more from Dennis Carstens!