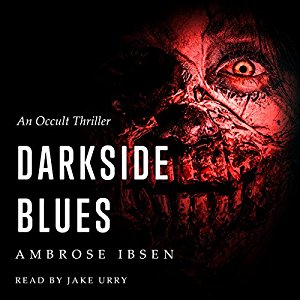 Synopsis
"Ghosts don't simply latch onto places, investigator. People can become haunted, too."
A missing person. A city plunged into unforgiving winter. A dangerous spirit.
Though enjoying an increase in business following his last case, life isn't all roses for private investigator Harlan Ulrich. His newest job, another missing person's case, is unlike any other he's ever taken on.
Local businessman Michael Poole hires Ulrich to find his estranged daughter.
The problem?
She's been dead for a decade.
Join Ulrich on a trip into the darkness, into the frostbitten underworld, as he seeks out a hateful phantom with only a cat and a thermos of good coffee on his side.
Darkside Blues is the third novel in the Ulrich Files series by Ambrose Ibsen.

My thoughts:
I’m sort of reading this series backwards but so far it hasn’t been an issue. Darkside Blues starts of slow and was sort of difficult to get into, but once I got further into it the more I wanted to know what happens and I began to enjoy the book.
The narrator was amazing! I love his accent and the way he could do the different sound effects with absolutely no mistakes. He made the story flow nicely and made it easier to listen too.


Overall, I give Darkside Blues five stars!
Created by: abookandalattee at June 07, 2017