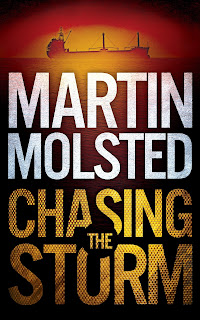 Chasing the Storm
by Martin Molsted

He’d seen people die before, but never on a pretty afternoon in Hamburg.
Torgrim Rygg was walking to the bar he’d found near the Chilehaus and was halfway across the Orfeoplatz, when the pigeons suddenly clattered up and the woman walking towards him stopped, aghast. She put her hand to her throat and chewed, her eyes on his face, as though she recognized him and was trying to remember his name. She was middle-aged, with sturdy dyed-blonde hair and a stiff bosom cased in satin. She turned in a circle, staggering a little on her heels, and when she faced him again the top of her blouse was crimson. She was looking at him as she fell. Her handbag burst open, spilling lipstick, tampons and a glasses case onto the cobblestones. She kicked for a few seconds, as though she were still trying to walk, and then, with a gurgling whine, spewed a mouthful of blood and lay quiet.
In the immensely slow seconds that followed, he watched the runnels of blood grouting the cobblestones. Her hand had fallen away from her throat, and the blood beat from two holes, one on each side of the voicebox. And in that moment, he remembered the small sound just before the pigeons had scattered: a crisp tok. It was a sound he hadn't heard for twenty years, and one that sent a line of flame down each nerve.
Rygg glanced quickly around the square. He was the only person to have noticed the woman. A businessman strode past with his briefcase and a mother was fixing the strap on a stroller. Two couples were drinking coffee under an awning. Then, in the hoop of shadow that was the entrance to an alley, a darker clot detached from the wall. A mustached face caught the light for a moment, and then the figure vanished. Shouting, Rygg ran toward the alley, but it branched almost immediately into three smaller alleys. The figure was nowhere to be seen. He chose the left-hand branch at random and ran for a little way, his shoes making a huge racket off the walls, then stopped, gulping for air. His belly hurt. He leaned against the wall. Massaging his gut, he labored back to the square.
There was now a huge throng around the fallen woman, thirty people at least, jostling and craning. He couldn't imagine where they’d all come from. Four people were facing away from the crowd, talking on their cell phones and gesturing. The pigeons had settled at the edge of the square, on the steps of a church. Rygg just stood there, watching. He glanced around the square. On the far side, by a bank of flowers, a man sat with his back to a wall, arms crossed. Alone amongst the onlookers, he seemed unmoved by the commotion. Rygg narrowed his eyes, then he walked swiftly over to the man and crouched beside him. The man’s face was gaunt and gray, a stark contrast to the gaudy roses and carnations. He was clutching his upper arm so tightly the knuckles were white. Blood oozed between his fingers.
“You've been shot,” Rygg stated.
The man just stared at him.
“I’ll get help,” Rygg said, but the man, with a grimace, stretched the hand of his wounded arm toward him.
“Please reach into the breast pocket of my shirt and take out my cigarettes,” he said. His accent was a little too rounded to be English, and his voice seemed far too steady for a man who’d just been shot. Rygg did as he asked. They were cheap Gauloises. The lighter was in the packet. He placed a cigarette between the man’s lips and lit it.
“Now I’m going to get someone,” Rygg said.
“Please, sir, if you want to help me you will not do so.”
“Look, you've just been shot in the arm. You’re lucky you’re alive – that woman’s dead, I think.” He pointed back into the square. “But you need to stop the bleeding, get some stitches. I’ll stay with you if you need me.”
“You are a tourist?” the man asked unexpectedly.
“Yes. Well, here on business, but mixing it with some pleasure.”
“You are staying in a hotel?”
“The Crillon-Hapsburg. On—”
“Hasselbrookstrasse. I know it. Please. If you want to help me, take me to your room. For one hour, not more. You will be recompensed.”
“I’m not after money, I just . . . look, you need a doctor. You can’t just—”
The man turned to Rygg. His eyes were dark, the eyelids bruised by too much tobacco or too many late nights. He sucked on the cigarette, then took it out of his mouth and tapped the ash away. “This is an unusual request, I know,” he said. “I am going to ask you to trust me. If you want to help me, if you want to keep me out of danger, take me to your hotel room. For one hour only, I assure you. Then I will leave you alone.”
Rygg looked at him. Then he shrugged. “It’s your life, I suppose, but you’re bleeding all over the place.” He reached into his pocket, pulled out his handkerchief, and knotted it above the wound, pulling it tight.
The man nodded his thanks. With his bloody hand, he grabbed a bunch of red carnations from the plastic bucket beside him and clutched them to the wound. Rygg helped him up and led him around the block – avoiding the open space at the platz – holding his good arm by the crook like a lover.

Did you enjoy this excerpt?
Read more at http://bit.ly/GetChasingTheStorm 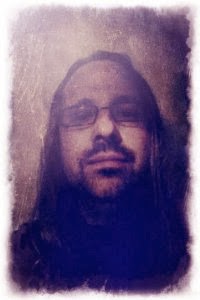 
Chasing the Storm is Martin Molsted's debut novel, although he has been actively engaged in writing shorter fiction, as well as screenplays since 2009. When he is not working as an Archivist in a Fortune 500 engineering company, he writes fiction and non-fiction.
He enjoys playing music, singing, travelling, nice food, great wine, tasty beer, hot rods and awesome custom built motorcycles.
Martin Molsted lives in Asker, a small town between the greater cities Oslo and Drammen, in eastern Norway. He lives together with his French wife and their two daughters. No cats. No dogs.
He is currently working on the storylines for a trio of further Rygg & Marin thrillers, so stay tuned for more compelling and intriguing action.
Find out more about Martin Molsted and his works of fiction at http://www.molstedfiction.com , https://www.facebook.com/authormolsted , https://www.goodreads.com/author/show/7350785.Martin_Molsted  , or Twitter @molsted.

See what other readers are saying about Chasing the Storm: