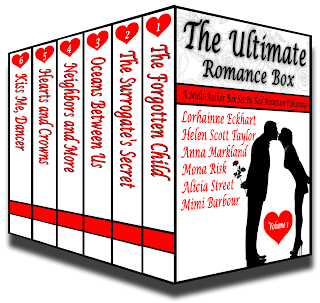 Prepare for the ultimate wild ride, whether you're looking for a charming hero, a smokin' hot rancher, sexy tycoons, unconditional love, family drama, or the politics of a forced marriage, heart-stopping and heart-melting romance sweeps across continents and history and waits for you inside.

THE FORGOTTEN CHILD by Lorhainne Eckhart: How do you tell a man there is something wrong with his child? A romance as vast as the western setting: can unconditional love between a man and a woman, a man and his son, and a woman and a little boy who she grows to love survive a bitter ex-wife?

OCEANS BETWEEN US by Helen Scott Taylor: A wealthy Italian celebrity falls for a penniless guesthouse cook. Commitments and continents conspire to keep them apart.

NEIGHBORS AND MORE by Mona Risk: In the Blue Waves High Rise where so many neighbors live too close for comfort, Dante, the handsome Sicilian lawyer, and Alexa, the wealthy young divorcée, try to hide their idyllic romance. When a neighbor drowns in the Jacuzzi, life will forever change in the Blue Waves.

HEARTS AND CROWNS by Anna Markland: Once bitten...twice shy. Can love overcome hatred and bitterness in this sensuous historical romance?

KISS ME, DANCER by Alicia Street: A roller coaster of a romance between a woman about to lose her dream and an arrogant trucking mogul with the means to save it. A dance instructor, a divorced dad, and the little boy who needs them both. 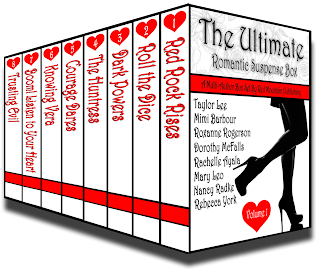 Prepare for the ultimate wild ride, whether you're looking for fiery undercover agents, sexy detectives, spunky bounty hunters, or shattered athletes, there's a sizzling suspense or humorous foray into the world of kink waiting inside.

RED ROCK RISES by Taylor Lee: No one messes with Red Rock, a fiery former undercover agent, as tough as she is beautiful-- until she meets the handsome Police Chief.

ROLL THE DICE by Mimi Barbour: A feisty, smart woman detective who every other cop respects and protects; a classy, purse carrying cowboy who's a man's man and a woman's dream; a sick rapist they both want captured...or dead!

COURAGE DARES by Nancy Radke: Mary prays for courage to overcome her tragic past and finds her answer in the dangerous present. A non-stop thriller set in the Cascade Mountains of Washington State.

KNOWING VERA by Rachelle Ayala: Vera's father killed Zach's mother long ago. Can Zach look past Vera's dark family history and help her dodge a killer while learning to live as an amputee? Knowing Vera is a suspenseful, cross-cultural romance mixing an unsolved murder, adventure, and hot, steamy love scenes.

DARK POWERS by Rebecca York: Can his dark powers save her sister's life? Their uneasy working relationship flares into hot passion as they navigate the dangerous waters of a beach town where nothing is as it seems.

BOOM! LISTEN TO YOUR HEART by Roxanne Rogerson: A humorous foray into the world of kink.

TRUSTING EVIL by Mary Leo: She witnessed what was touted as the Crime of the Century---the murder of eight student nurses in South Chicago---and it nearly destroyed her until one man rescued her damaged heart.

THE HUNTRESS by Dorothy McFalls: Spunky bounty hunter Vega Brookes meets her match when she hunts down a dangerous ex-special forces officer accused of murder. 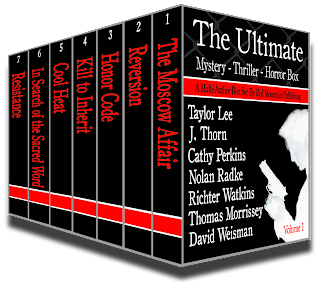 Prepare for the ultimate wild ride, whether you're looking for ghostly or sexy detectives, family and military dramas, mind-twisting space opera, or a fast-paced, edge-of-your-seat, crime-thriller, there's a sizzling suspense, dramatic mystery, or a shattering dark fantasy waiting inside.

THE MOSCOW AFFAIR by Taylor Lee : A dangerously elegant man and a beautiful feisty young woman, take on the evils of the international sex trade while exploring a passionate world of their own.

REVERSION: THE INEVITABLE HORROR by J Thorn: In a forest littered with caution tape and artifacts of the deceased, Samuel must outrun the ominous cloud eating away at reality. As the dying world collapses upon itself, he has to find a way to escape the Reversion.

KILL TO INHERIT by Nolan Radke: Will a second murder help the ghost detective unlock the mystery behind his own?

COOL HEAT by Richter Watkins: She was the woman they couldn't kill and he couldn't resist.

IN SEARCH OF THE SACRED WORD by Thomas Morrissey: Jeremy Storyteller died and came back. But he didn't come back alone.

Created by: abookandalattee at November 23, 2013