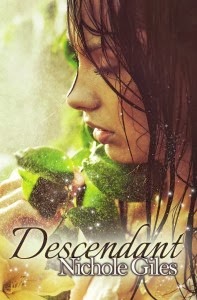 Blessed—or cursed—with Sight and Healing, Abby lives an unsettled life, moving from place to place and staying one step ahead of the darkness that hunts her. When she arrives in Jackson, Wyoming, she is desperate to maintain the illusion of normalcy, but she is plagued with visions of past lives mixed with frightening glimpses of her future. Then she meets Kye, a mysterious boy who seems so achingly familiar that Abby is drawn to him like he’s a missing piece of her own soul.

Before Abby can discover the reason for her feelings toward Kye, the darkness catches up to her and she is forced to flee again. But this time she’s not just running. She is fighting back with Kye at her side, and it’s not just Abby’s life at stake.

In this scene, Kye and Abby have come looking for a man who can tell them more about the missing Arawn Keys (ancient artifacts thought to be used to seal an entire community of demons in an underground prison) and what those Keys have to do with them. They have already faced a number of frightening, evil situations, and are feeling cautious about this one as well. They’re short on time, but have just discovered that they’re in the right place.

“Let’s find this guy so we can get out of here.” Kye pulls me up and keeps my hand in his as we head back through the casino to the front lobby. The lady at the information desk frowns when Kye asks for Juri but doesn’t know if it’s his first name or his last. She picks up her phone receiver and turns her back on us, speaking in a hushed voice. Facing us again, she gestures at a security guard. “Walt will take you to Mr. Juri’s office.”
Walt, a big guy in a scary-looking uniform, eyes us up and down, causing my heart to pound in apprehension. No turning back now. We follow him down the same hall we explored a few minutes ago, but this time a cloud of dark energy looms, threatening to overwhelm me. The lights flicker and dim.
I squeeze Kye’s hand until my fingers ache, trying to tell him something’s not right. He squeezes back. He feels it too.
Walt opens the enormous door, and terror slams into me as I’m met with a pair of familiar cat-like yellow eyes. I know this man. I remember seeing him the night Gram died. His eyes bore into me and I feel an evil kind of heat in him. The blood drains from my face and the air backs up in my lungs. Kye squeezes my hand. “Abby?”
“It’s him,” I whisper. “I know him.”
The man shakes his head. “Can I help you?”
Kye’s muscles go rigid and he pulls me close with a protective arm. “Mr. Juri? Landon
Akers sent us.” 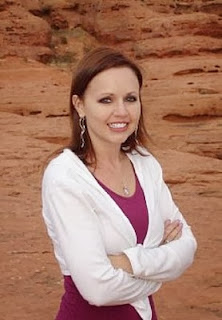 About the Author:
Nichole Giles had early career plans that included becoming an actress or a rockstar, but she decided instead to have a family and then become a writer.

She was born in Nevada, the oldest of seven—a number which increased to eleven with the addition of four step brothers—and has lived in Utah, Nevada, Arizona, and South Texas.

Her future aspirations include owning a home on a tropical island, even if it's just a vacation home. For now, she plans to travel to as many tropical locations as possible, scouting for her future paradise.

Currently, she lives with her husband, one of her two sons (the other is in college), two daughters, two golden retrievers, and one lucky bunny rabbit.

Writing is her passion, but she also loves to spend time with her family, travel to exotic destinations, drive in the rain with her convertible top down, and play music at full volume so she can sing along

Created by: abookandalattee at November 09, 2013