Author Toni Aleo takes the time to answer your -- the readers, questions!

Starting today, every Friday, until the release of Blue Lines, Toni Aleo will be taking and answering your questions via Youtube. She also giving away 5 SIGNED PAPERBACK COPIES!

Opposites do more than just attract in Toni Aleo’s latest Nashville Assassins novel about a very bad boy and the good girl he can’t resist.

The instant Piper Allen sees Erik Titov, she wants him—wants his rock-hard body, sure, but the strength and mystery that lies behind that superstar hockey jock demeanor, too. So when he sidles up to her at a bar and slinks his arm around her waist, she’s lost. What follows is the wildest night of her life . . . followed by inevitable heartbreak the next morning. And then, a few weeks later, a very big surprise: two blue lines on a pregnancy test.

Only a check to the head could make Erik fall for a nice girl like Piper. But since their crazy-sexy night together, he’s been trying to forget about her alluring body by falling into bed with every woman in Nashville, and it’s not working. So when Piper shows up at his house with a baby-bomb to drop, it doesn’t take much for Erik to suggest the nuclear option: marriage. While it’s supposed to be all for show, the second they say “I do,” the ice between them starts to melt into sizzling steam.

Includes a special message from the editor, as well as excerpts from these Loveswept titles: Taking Shots, Trying to Score, and Empty Net. 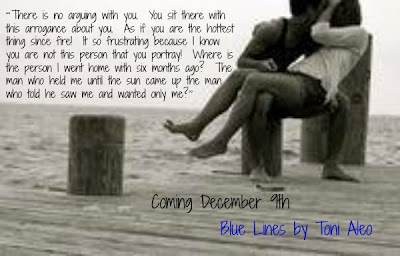 
Also, if you haven't entered her instagram #BlueLines Party today is the last day! You could win 1 of 3 gift cards!

If you check out the #BlueLines hashtag on Instagram you can get a pretty good idea of what type of video to make. :)

Toni Aleo is the author of the Nasvhille Assassins series: Taking Shots, Trying to Score, Empty Net, Falling for the Backup, and Blue Lines.

When not rooting for her beloved Nashville Predators, she’s probably going to her husband’s and son’s hockey games and her daughter’s dance competitions, taking pictures, scrapbooking, or reading the latest romance novel.


She lives in the Nashville area with her husband, two children, and a bulldog. Read more about Toni here.

Created by: abookandalattee at November 21, 2013