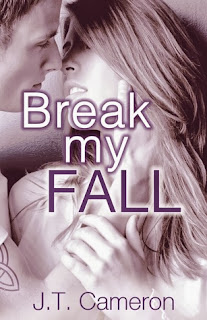 When Leah’s ex-boyfriend Kevin betrays her in a horrifically public way, she leaves town to spend her last summer of college in a place where no one knows who she is or what happened to her.

All she wants is a little peace of mind and some good surfing so she can regroup before returning for her senior year.

After his own tragedy a few years ago, Drew developed an entirely new and unique outlook on life and became a risk-taker, daring and dangerous, everything Leah wanted to avoid.

But a bizarre encounter forces her to let Drew into her life, little by little, secret by secret. He’s smart, funny, persistent, and makes money in a rather unconventional way.

They share a mutual fascination and attraction, until her past with Kevin complicates her present with Drew, making Leah question her future.

Just as her life seems to be spinning out of control, Leah learns that sometimes you save someone by letting them save you.

***(BREAK MY FALL, the first book in the No Limits series, is a complete, full-length novel that can also be read as a stand-alone.) 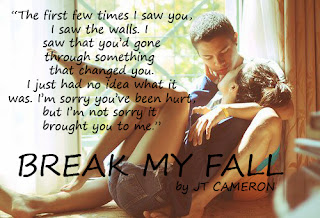 I had talked to Drew on three previous occasions over the summer, each time wanting nothing more than to be left alone. Our fourth conversation took place the day I got arrested, and it changed everything.
It was the middle of July and Tropical Storm Andrea was bearing down on the South Carolina coast. Most people were secure in their homes for the day, avoiding the winds and flash flooding, heeding the warnings of local officials.
But to me, those warnings were made to be ignored, especially when the advisories called for waves that would be six to eight feet high.
Surfing is how I find peace. It’s the purest form of escape I've ever known. I had always felt like that, but after what happened to me a couple of months ago, having an escape from everyday life was more critical to my survival than ever.
I had fled from my life a few months ago, leaving Florida and ending up in the Charleston, South Carolina, area. I had escaped in a literal, physical sense, but I still craved the mental escape, and for me there was no better way to do that than riding waves.
The tide was going out—a good thing in any tropical storm or hurricane—and as I walked across the sand toward the water, the incoming waves hurled themselves toward the beach, crashing violently and disintegrating, followed shortly by another, another, another… The waves here on Isle of Palms are sometimes pretty decent and surfing-worthy, but nothing like the ones provided by Tropical Storm Andrea.
I walked into the ocean, feeling the undertow pulling at my ankles, almost urging me to go farther out, an urging I didn't need because I was about to get in some of the best surfing I’d had since arriving here.
Past the first few breakers, I placed my board down on the water, flopped my belly down on it, and began paddling. First straight out, then parallel to the beach, waiting for the wave that would take me back to shore.
I chose my wave, paddling myself into position. My brain switched into what I call Surfing Escape Mode:
I’m on the wave. It’s powerful. Rough. Almost violent. It pushes me. Lifts me.
I’m free.
I have to work to remain free—flexing my leg muscles; using my arms to balance my body; shifting my center mass to stay steady; all of this is work, hard work, but the payoff is being free.
It’s usually over in a matter of seconds like that. But those real-time seconds are long dream-like minutes, and that’s exactly what I desire.
The freedom didn't last long that day, though, because as I trudged through the knee-deep water where the ride ended, I looked up and saw a cop. He stood facing me, a few dozen yards away up on the beach.
I don’t know how long he had been there. Probably just a few minutes. But if he’d been yelling, I hadn't heard it, thanks to the noise of the roiling Atlantic, and the wind. It was mid-afternoon, but the storm made it seem like dusk. Using his flashlight, the cop motioned for me to get out of the water and come toward him.
I had a choice to make: either pick up my board and obey the officer, or ignore him and go back out for one more wave. 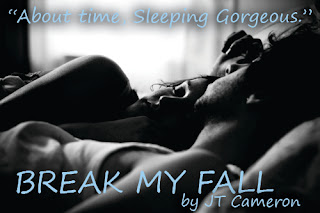 Author Bio
J.T. Cameron is an author and major peanut butter addict. BREAK MY FALL, a New Adult contemporary romance, is available now. J.T. lives in Charleston, South Carolina, and when not writing, spends a lot of time reading, watching movies, cooking, and enjoying a night out on the town that hopefully doesn't involve interacting with the police.

Giveaway
a Rafflecopter giveaway
Created by: abookandalattee at October 30, 2013