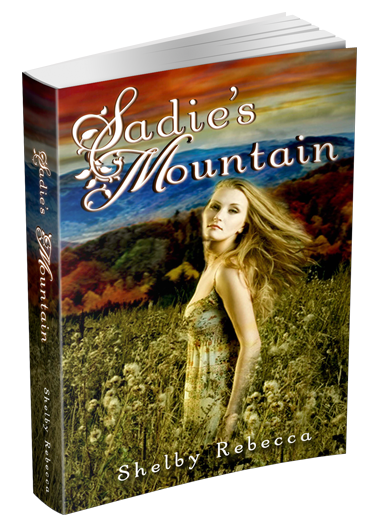 Synopsis:
One fateful night, Sadie Sparks' young life was changed forever. Just as she was discovering love with her best friend, Dillon McGraw, someone else was plotting to take her for his own. Faced with choosing between the fear and threats and a safer life, Sadie leaves her West Virginia home for good.

A decade later, Sadie returns to Appalachia to care for her ailing mother, but stays to fight for the mountain she loves. Her struggles to protect it from being ravaged for coal put her in greater danger than she ever imagined — and back in the arms of the man she never stopped loving. But the man responsible for changing her life so many years ago is determined to keep her under his control. When she decides to break free, will Sadie and Dillon's bond be strong enough to endure the truth about his identity?


The last time she saw Dillon:


He came to me that same night. I wasn’t sleeping as he tapped on the window in my room. I got up slowly, trying not to wake up Missy in the bed next to mine, but also because of how sore I was.


All my muscles felt like deep bruises reminding me of how they were abused. My neck was just newly scabbed over. It was rough and itchy. I had crescent shaped fingernail marks on my face where Donnie’s hand had been when he was trying to keep me quiet. There were small cuts in little x patterns on my stomach from Donnie’s knife when he’d held me in place. Bothersome mosquito bites burned on my bottom and thighs. The stinging belt marks were swollen on my back, arms and legs, and it ached, like ripping paper, at the apex of my thighs.


I opened the window letting in a healthy breeze that pushed my hair away from my face. The air sounded of crickets and frogs.


He looked so relieved to see me as he stood slightly below the edge of the window. It took him a moment to remember to breathe. I knew I was standing there but I felt like an empty vessel. He smiled at me but I didn’t smile back. He looked worried again and swallowed.


“You look better,” he said as if I was a wounded animal about to bolt. I didn’t respond. “Will you come outside and talk to me, Sadie?”


“I just want to help you, darlin’,” he said, softly, but his face looked pained.


“You can’t help now.” My voiced sounded foreign like it belonged to another person I didn’t know.


“I can take you away from here. When I go to college you’ll come, too. Or I’ll get a job right now and buy us a little house.”


“This is all my fault,” he said, putting his hand over his stomach in physical pain.


“I’m sorry I touched you, baby.” He put both his hands on the windowsill. “I hadn’t even realized what I did. It was just so natural.”


“I’m not mad about that, now,” I said. He reached toward me through the window as if he was going to soothe me somehow. I flinched and he stopped.


“I’m sorry,” he apologized again, his eyes wider than I’d ever seen them. I didn’t like to see him that way so I just looked down at the dirt instead.


“Nothin’s changed about how I feel for you. You know that. You’re still my girl, right?” He sounded like he was begging.


“Who did this to you?” His voice was hot lava.


“You should go,” I said as I rubbed the lump in my throat and felt the scabs on my neck again. He looked wounded and I felt sad for him through my numbness. This wasn’t his fault. All I kept thinking of were Donnie’s words, “I’ll kill him too.” I needed to let him go, to free him of this obligation he had to the girl I used to be two days before.


“I’m not the girl you loved anymore, not the same at all. She’s gone now.” I looked away from him as if I was looking for where that girl might have gone.
“I’ll wait. Forever if I have to. You’ll get better. I can help.”
“I don’t want you to.”  He deserved better was all I could think. He was so perfect and I was so dirty now. I disgusted myself. “Look, I won’t see you again, Dillon. Just go and live a happy life.”
“I won’t force you, Sadie.” His voice sounded louder now, his fists clenched, with the pain right at the surface. “You’re my best friend. I’ll never love anyone but you!”


His volume caused me to turn and check on Missy. She wiggled from her back onto her side but was still asleep.


I looked back out the window and just shook my head at him. “You shouldn’t say that.” He would move on someday. He would be okay. This was protecting him, too, like throwing rocks at a dog so it wouldn’t come with you and get hurt. He had no idea.


“I have to go,” I said, as I started to close the window. He put his hand out to me but stopped at an imaginary line between us.


“Please, don’t shut me out.”  He was panicked now, his voice like red silk waving in a wind storm. I couldn’t look at him anymore. I had to let him go.


“Goodbye, Dillon,” I said and I slowly shut the window on him. He stood there for a long while, stunned. I was behind the curtain but it was see-through enough so I could watch him illuminated by the moonlight. I wondered if it went both ways if the lights were on in here and it was dark out there.


Suddenly, his knees buckled under him and I heard him cry out as he punched the ground with his fist. The sound made its way through my cloud of emptiness and echoed around like a lone wolf howling in a low holler. That sound will never leave me.


I watched his hunched-over shape silently writhing in pain. His dream of me, of the girl I was and the wife I could have been to him, must have died right then. He was mourning that girl, the one who went into that shed, not the one who came out twenty minutes later.


He could never love her. No one could. No man ever has.


About Shelby Rebecca
Originally from Wasilla, Alaska, I now live in Northern California in my first real house with my husband, John, daughter, Elise, and our two mutts, a beagle and an Australian terrier. I’m a vegetarian with a unique accent that merges Alaskan vowels with Valley Girl, and I love Ryan Gosling—but who doesn’t. The eco-theme in my book comes from being Healthy Child Healthy World's first ever Mom on a Mission in late 2009. My story was featured in People Magazine, Lifetime's Remarkable Women series, The Sacramento News and Review, and is a highlighted story on the advocacy website Care2. Sadie's Mountain is my debut novel.


a Rafflecopter giveaway
Created by: abookandalattee at October 29, 2013