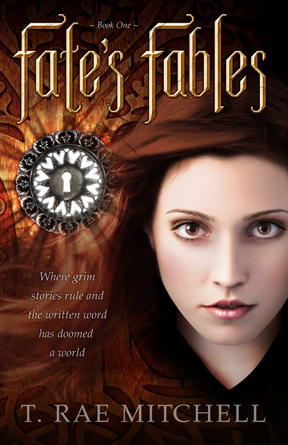 
Seventeen-year-old Fate Floyd loves adventure –– as long as it’s enjoyed from the comfort of her couch. So it’s probably best she has no idea the future of the universe rests squarely on her shoulders.

Far from Earth in the deepest region of space, a colossal screw-up has unleashed terrible forces within a secret vault called the Keep. In a last ditch effort to prevent eternal chaos throughout the cosmos, the Keep’s Guardian must send her successor on a desperate mission.

Summoned by this complete stranger’s spell, Fate’s cast into a savage wonderland bound by the ancient Book of Fables to retrieve a magical object powerful enough to set everything right. And if getting chucked through a secret portal isn’t traumatic enough, Fate discovers the only way out is to change the endings of the book’s 8 dark fables into their mirror opposites.

Fortunately, she doesn’t have to run this gauntlet alone because she meets the mysteriously familiar Finn, who’s as inexplicably drawn to her as she is to him. As they endure horrors beyond imagining, Fate awakens to powers she never knew she possessed and Finn questions his very existence, while an insidious darkness changes him in frightening ways. Ultimately, Fate must confront the faceless evil concealing itself behind the eyes of her one true love or remain trapped within the Book of Fables forever.

An Excerpt from Fate’s Fables


From the second Fate spoke the fable aloud, the inked words lifted off the book’s ancient pages and a flurry of letters swirled around her. Then, like tiny pixels, the letters combined into a scene formed by her imagination, bursting into life all at once in a symphony of sights and sounds. The fable flowed through her. She became its voice without knowing the words, each sentence generating more and more of the living, breathing story. She was part of it, yet each time she reached out to touch the rich reality encircling her, the images rippled like a drop of water disturbing the reflective surface of a still pond. When at last the tale came to an end, the fantastical characters and enchanting scenery splintered into a storm of letters, the release so abrupt she thought she was falling from a frightening height.


Her knees hit something soft, moist and gritty. Dizzy and nauseated, she kept her eyes shut, the sound of the ocean still lingering in her mind. Though now she smelled the brine blowing off the waves.


There was something so wrong about that.


Finn touched her arm, his fingers squeezing lightly. “Are you all right?”


She focused on the warmth of his hand, her mind trying desperately to reject what felt like sand beneath her. “Please tell me we’re still in the bookstore,” she said, before turning her head in the direction of his voice, opening one eye and then the other.


“Uh, sorry. I’d venture to say, we’re far from it,” he said, his tone uncomfortable.


He looked pale. Was he as frightened as she was? She kept her eyes glued to his face, refusing to look elsewhere, willing the setting behind him to change back into the dim interior of the bookstore. The backdrop remained stubbornly bright and sunny as he stood and tilted his head to the sky.


“I’m guessing this is Elsina’s drifting island,” he said. “At least I think so. Those gulls look normal enough. Course they could’ve hitched a ride from some other port, but I’m surprised we’re not being greeted by her circus animals.”


Curiosity got the best of Fate. She glanced up at the seagulls circling overhead. When she saw they were ordinary, she wasn’t sure if she was relieved or disappointed they hadn’t been feathery freaks. But now she’d gone and looked. Giving up, she dropped her gaze to where the Book of Fables leaned against wet shale stretching high into towering black cliffs. She broke out in a rash of anxiety as she turned, her knees digging an arc in the sand as she stared open-mouthed at a breathtaking beach of white sand set within a sheltered cove. Beyond the breaking shoreline, the ocean stretched away from them into an endless, empty horizon.

She wasn’t in Kansas anymore.


Fate’s Fables is a fantastical page turner, I seriously couldn’t put it down. Poisoned oaks, druids, faeries, and trolls….. Fantasy buffs will be all over this first novel in the Fate’s Journey series. T. Rae’s knowledge of the fables in this book are extremely vivid. The writing is an old style which I believe is really hard to duplicate within this day and age, but with T. Rae’s ingenious imagination and enchanting storytelling it all comes together brilliantly. 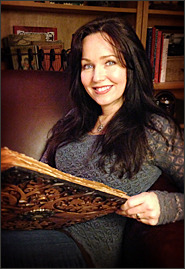 Author Information:
T. RAE MITCHELL is an incurable fantasy junkie who spent much of her youth mesmerizing her younger sisters with stories sprung from her crazy imagination. Over the years, her craving for the rush of being transported to fantastical realms became more acute. So it was only a matter of time before her habit got the best of her. Grief stricken one day upon discovering that her supply had dried up (her favorite bookstore had closed), she decided she’d had enough. Abandoning her career as an award-winning graphic designer, she entered a fantasy world of her own making called Fate’s Fables. She lives in British Columbia with her husband and son who are helping her cope with her addiction. This is her debut novel.