Chicago restaurateur Elso Bari specializes in locating those who don’t want to be found, but in the shadowy worlds of private security and organized crime, it can be hard to distinguish the hunters from the hunted.

Elso Bari runs a restaurant in Chicago, and a sideline in private investigation. A stylish connoisseur of fine wines and gourmet cuisine, he’s also no stranger to the seedier side of city life. His debt to a powerful organization obliges him to investigate the suspicious death of one of its employees, a man with ties to international art trafficking. The trail leads Elso to Barcelona, where he becomes entangled in the hunt for a female contract killer who uses sex as a weapon—and is too smart to be tracked down by just anybody. Elso is comfortable moving in the shadows, but the deeper he delves into the criminal underworld, the harder it is to know whom he’s working for and whom he’s seeking, let alone why.

Award-winning author David C. Hall navigates the murky waters of morality and transports the hard-boiled American thriller to the Mediterranean, giving a cosmopolitan twist to this action-packed tale of murder, sex, and betrayal.


David C. Hall’s Barcelona Skyline first caught my attention because he’s a local author of mine. Yes! He was born in Madison, Wisconsin. I was intrigued right then and there by his short novel. With Barcelona Skyline’s intriguing background and this crazy sexy killer that’s using sex to kill people and Elso the private investigator who’s on the hunt for this madwoman. Who’s this sexy killer knocking off the Chicago restaurant owners? My question is, is who is Elso really working for?


Barcelona Skyline is good for one of those nights at home as it’s a short novel but I didn’t like the ending. What exactly happened??


Describe the book in your own words.


Barcelona Skyline is about power, as seen from below. The players are mercenaries, doing a job, but however tough or smart they may be, they are also being played. They never quite know what is going on, or why – which is, I suspect, the way the world works more often than we would like to think. It is an investigation that is also a chase, seen from the point of the hunter and of the hunted. And the deeper the hunter goes, the murkier it gets.


Describe any of the major figures, personalities and characters within the book.


Elso Bari is a Chicago restaurant owner, a connoisseur of fine food and wine, who does a little detective work on the side. Elso has a certain weakness for sexual adventure, and the woman he ends up hunting uses sex as a weapon. Secondary characters include two British investigators working for a security company, art dealers working a money-laundering scam, an ex-CIA man who works as a “consultant,” the leader of a sect devoted to helping ex-drug addicts recover, a poet with a past and fondness for heroin…


How did you come up with the idea for the book? How did it come to be?
I always like how on detective series on television years ago, the investigator would run up against “minor” characters who didn’t really have much to do with the plot but in just a brief scene seemed to suggest a whole fascinating life of their own. I wanted, among other things, to do that, to make each chapter rich enough to stand on its own. And I wanted to bring in different themes I’m interested in: Spanish cooking, the art world and its potential for money laundering, and how private corporations are taking over security and intelligence activities that used to be reserved to government agencies. And I wanted to use as settings not just the city of Barcelona, but also the surrounding areas, towns along the coast, developments up in the hills.


How did you come up with the title of the book?


I stole it actually. A guy I used to play pool with got up before dawn every day for years and took panoramic photos of the city from up in the hills. He marketed the pictures under the trademark Barcelona Skyline. There is a scene at the end of the book with a couple of the characters looking down at just that view of the city. I thought it sounded right. 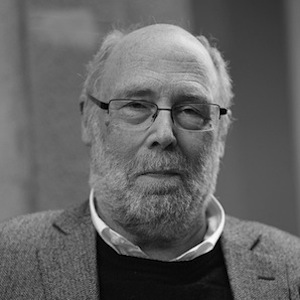 David C. Hall (b. 1943) grew up in the Midwest and lived in different parts of the United States—working jobs that ranged from the Forest Service in the Oregon woods to cooking pancakes in Seattle—before arriving in Barcelona in 1974. In Spain, he became involved in the surge of political activity in opposition to the Franco regime. He worked as an English teacher and later as a translator, and was active for several years as a trade unionist. His first crime novel, written in English, was published in Spanish as Cuatro días (Four Days) in 1984. Billete de vuelta (1990) appeared in the United States in 1992 as Return Trip Ticket. Hall won the Semana Negra short story prize in 1991 and the Pou de la Neu short story prize in 2008. His latest novel, Barcelona skyline, won the 2011 City of Getafe Crime Novel Prize.