Review 3: If You Stay (Courtney Cole) 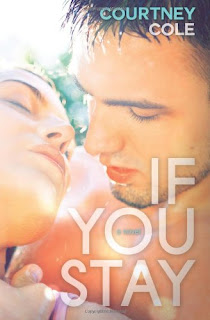 
24-year old Pax Tate is an asshole. Seriously. He’s a tattooed, rock-hard bad-boy with a bad attitude to match. But he’s got his reasons. His mother died when Pax was seven, leaving a hole in his heart filled with guilt although he doesn’t understand why. What he does know is that he and his dad are left alone and with more issues than they can count. As Pax grew up, he tried to be the kid his father always wanted; the perfect golden boy, but it didn’t work. His dad couldn’t overcome his grief long enough to notice and Pax couldn’t keep up the impossible perfect façade. So he slipped far, far from it. Now, he uses drugs and women to cope with the ugliness, the black void that he doesn’t want to deal with. If he pretends that the emptiness isn’t there, then it isn’t, right? Wrong. And it’s never more apparent than when he meets Mila. Sweet, beautiful Mila Hill is the fresh air to his hardened frown, the beauty to his ugly heart. He doesn’t know how to not hurt her, but he quickly realizes that he’s got to figure it out because he needs her to breathe. When memories of his mother’s death resurface from where he’s repressed them for so long, Mila is there to catch him when the guilt starts making sense. Mila is the one…the one who can save him from his broken troubled heart; from his issues, from the emptiness. But only if he can stop being an asshole long enough to allow it. He knows that. And he’s working on it. But is that enough to make her stay?


Cover Photo:
Courtney Cole’s “If You Stay” cover photo is totally awesome! It was the first thing that drew me into clicking on the description and which I ended up purchasing the book.

5 out of 5 for the writing score of “If You Stay” just because it was one of the best reads that I’ve read so far by Courtney Cole.
Recommendations:
If you’re looking for a good summer read that involves a beautifully written romance novel that shows a lot of emotion. Then this is a book to definitely add to your TBR list!


Memorable or Forgettable:
“If You Stay” is a memorable book for me, and especially the letter from Pax’s mother which absolutely grabbed my heart.
Rating:


Now I always love a good romance book and Courtney Cole definitely hit that spot with “If You Stay”. It was beautifully written but yet there were times when I couldn’t stop reading. Putting my kindle down wasn’t an option until I found out exactly what happened. As I mentioned earlier in my review that the letter from Pax’s mother really tore my heart up with the emotions that were displayed. Courtney Cole did a phenomenal job with “If You Stay” and the best part of it all – NO CLIFF HANGERS!!
Created by: abookandalattee at May 16, 2013