Release Blitz: Come Back To Me by Kathryn Shay 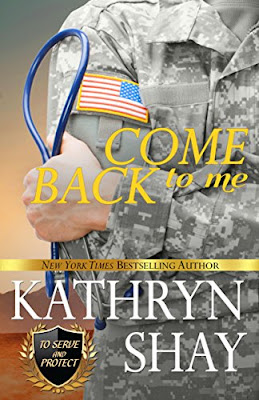 A family of heroes, all in dangerous jobs, all irrevocably tied to those they love. Read about the Marino clan in this fast-paced, emotional new series, To Serve and Protect, by NYT bestselling author Kathryn Shay.


Declan Marino was a lucky to get everything he wanted in life: marriage to his high school sweetheart, Delilah Carrier, and work as an army medic. But his world crashes in when his wife leaves him because she did not get what she wanted. Now, he’s raising his children alone, as he works in the ER and is periodically called up from missions in the Army Medical Reserve. Lila has snagged a promotion in the Pentagon. Life is hard and messy for all of them, especially their three girls. Follow Declan and Lila as they find their way back to each other and create a brand new life from the ashes of the old one.
COME BACK TO ME examines the difficulty of balancing two military parents and maintaining happy family life. The book also asks the question: can long-standing love triumph over the roadblocks of modern life? 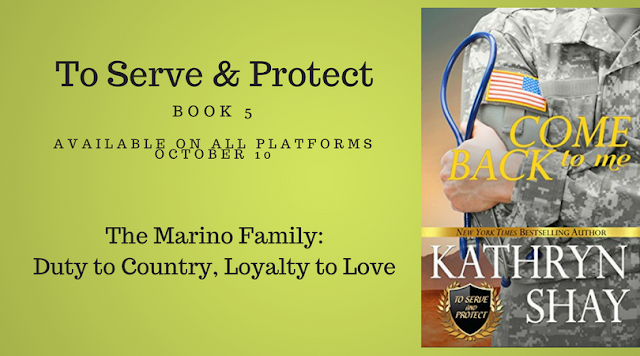 “Once again Shay shines in this starkly realistic story.” - Booklist

With a combination of excitement and dread, Declan looked around the empty house in Maryland that he’d rented for himself and the girls for a year.
“It’s big, Daddy.” This from Meli, his impish twin daughter. “Do we have our own rooms?”


“Of course.”
“Want to go see ours, Morgy?” she asked her sister Morgan. They both had blond hair and blue eyes, like him; Meli’s pixie-short, Morgan’s almost to her waist. Maggie, his oldest, was the spitting image of her mother.
Dec held out two hands, which his kids clasped. “I’ll show you.”
They climbed the open oak staircase with skylights shining down on the foyer and made their way around the railings. Declan led them down one hall. At the end were two doors. “Let’s go in here first.”


Once in the room, the girls scanned the wide windows, another skylight above the ceiling fan, and then their gazes landed on a doorway. Morgan rushed over and yanked it open. “It’s a bathroom.”
“With another door on that side.”


The girls burst through both entrances. Screeches. Proclamations like “Oh, this is so cool,” and “Just what we need!” Their rooms were connected by a Jack-and-Jill bath like the Marinos’ third-floor quarters, built for Whitney and Connor.


Declan leaned back against the wall, grateful that he could please these two munchkins after he’d uprooted them. Thankfully, they’d been old enough to go into middle school in Lakeville and would have had to change buildings anyway.


“I’m taking this one,” Meli said coming back in. “Morgan wants the other.”
Her sister hugged him. “We love them, Dad.”
“Uncle Nick scouted this area for us, which is close to our family, and when he saw this part with an adjoining bathroom, he thought the place would be great for you two.”
The house also had a master suite up here, making it four bedrooms, and a den and bath on the first floor. Which could be converted to a fifth area for his parents.


Meli crossed to a window. “Oh, look, a big backyard.” She turned to her father. “For our dogs, right, Dad?”
He’d also bribed them when he told them they were leaving Lakeville: if they cooperated in the move, they could each get a dog. He wanted animals anyway. “Yep, and the yard is fenced in.”


Morgan said, “Does the house have a room for Maggie?”
“You bet. This is her home, too.”


His oldest was at orientation for college right now, only forty minutes away at American University where she’d live on campus, but she also had her own space here. He hoped she’d use it.


“We wanna see yours too, Dad.”
“I’ll take you to the other hallway for mine, but Maggie should show you hers.” They’d been staying with Gabe and Macy, and he’d dropped Mags off at orientation before they came here around noon.


When the girls had their fill of touring, they settled in the kitchen. Declan had ordered a pizza so it was piping hot, the scent of spicy sauce and cheese filling the expansive kitchen/dining area. They sat at the long bar separating the two on the stools left by the previous owners and dug in. They were almost finished when chimes sounded.


“That’s our furniture!” Meli declared, sliding off her seat and racing to the foyer. Morgan followed and Declan took up the rear.
Meli threw open the door. “Oh. I thought you were our delivery.”
Lila, their mother, smiled at the girls. “Aren’t you glad to see me?” Dec recognized uncertainty in her voice.
“Yeah, Mommy, we are.” Morgan wrapped her arms around her mother’s waist, then Meli took her turn.


His ex-wife raised her gaze to Declan. “Hi.”


The mere sight of her churned him up inside. “I didn’t expect to see you today.”


“I got excited about the girls being so close, so I came out on my lunch break.”


Meli grabbed her arm. “Wait till you see our rooms. There’s lots of windows, a bathroom that connects us, and skylights.”


Lila’s mouth thinned. “How nice.” She looked at Dec. “I always wanted skylights.”


They’d lived in apartments in D.C., then bought a home in Lakeville, which was old, like most of the houses in town. “You should put a couple in your new place.” Declan almost cringed at the bitterness in his voice.


“It’s a colonial. Skylights don’t belong in that era’s dwellings.”
Ignoring her comment, he said, “Take Mommy on a tour, you guys.”


When they left, he returned to the kitchen and sat back down. He took a bite of a half-eaten slice of pizza, but now it tasted like cardboard. So he scanned the room. High ceilings with more skylights, now open to warm mid-August air, granite countertops, big enough for a table by the fireplace at the far end. Lila would probably love this room. But he hadn’t rented the place with her in mind. No, she had a new guy, a new house, a new life now.


Ten minutes later, the girls raced into the kitchen to the backyard through French doors. Their mother went outside with them, then came back in alone.
“This is lovely, Dec.”
He turned. Speaking of lovely, she looked pretty in a yellow summer sundress and strappy sandals. Her hair was up in a knot befitting the hot day.


“The house in Lakeville would have to sell first.” Though trauma surgeons—he’d been one for years—were paid top dollar, areas around D.C. and Maryland were expensive.
Taking a seat another stool down, she ignored the food. “So you came down here.” There was a cutting undertone in her voice, but he knew why. And she was entitled.
“My parents said moving was a deal breaker.” Like it had been in the end for him and Lila, though he didn’t know that at the time.
Her mouth got tight. “Did they buy something?”


“No. They’re staying with Nick now. They’ve had offers to stay in four different places. We don’t know if they’ll want their own.”
“Four?”
“Sure, here. There’s a first floor den for them. Nick and Gabe each have a suite set up and you should see the house Connor and Calla bought. It’s got a guest house behind the main one.”
“Befitting a princess.”


“And the heir to the throne.”


“Before the wedding.” He lasered her with a look. “Like us.”


“Are they happy about having a baby so soon?”


“I know we were wary at first, and especially when I was away those six months, but when Mags came we were happy, Lila.”


“I know. I guess what followed, what brought us to where we are today, is still in the forefront for me.” She shook her head, releasing a few more tendrils. “I thought we were invincible back then.”
“I did, too. What happened to those kids?”


“They grew up. And modern life was too much for them to withstand, I guess.”


“They’re splitting their time between Maryland and Casarina. They’re both working part-time at the D.C. clinic, but exploring options here for one of their own.”


The children burst back through the door at the end of the kitchen. “Daddy, they left their jungle gym. It’s got a fort, and a slide and swings.”


He frowned. “I was thinking about tearing those things down. That you’re too old for them.”
Their faces fell. Until Lila laughed. “Daddy’s kidding.”
“Oh.”


“Oh, good.”
Chimes again.
Declan stood. “That has to be our furniture.”
Meli tugged on her hand. “Yay! Mommy, can you stay and help us set up our rooms?”
She looked to Dec. He said, “Sure, I’ve got my hands full with the rest of the stuff. Will you be able to get out of work?”
“I make my own hours. I have to call in, though.” She looked down. “And I keep workout clothes in the car.”
“Then it’s settled.”
The delivery was the new furniture. And right behind the store guys was the moving van from Lakeville. Declan signed papers and Lila headed to her car. Halfway down the sidewalk, she looked over her shoulder and said, “I can’t believe you’re here.”
He didn’t know what to say. Or if he could even speak around the sock stuck in his throat. Had he made different decisions, if circumstances had gone their way, they could be buying this house together, settling in together, building on a life they made through the years.
But that was a fairytale, and he wasn’t a doctor marrying a princess, like Connor. He and Lila were two soldiers who just couldn’t merge their lives together.


Again, he thought, How sad. 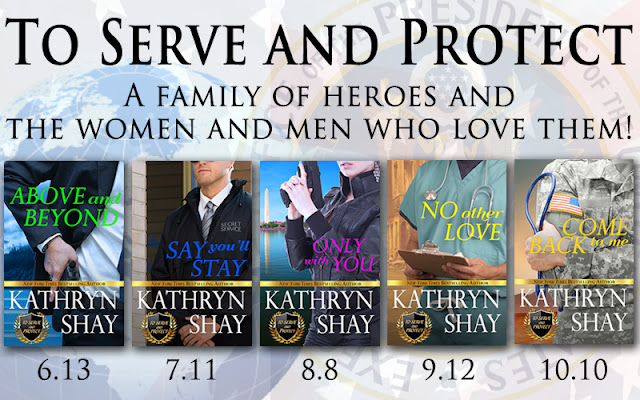 A New York Times and USA Today bestselling author, Kathryn Shay has been a lifelong writer and teacher. She has written dozens of self-published original romance titles, including print books with the Berkley Publishing Group and Harlequin Enterprises, and mainstream women’s fiction with Bold Strokes Books. She has won five RT Book Reviews awards, four Golden Quills, four Holt Medallions, the Bookseller’s Best Award, Foreword Magazine’s Book of the Year, and several “Starred Reviews.” Her novels have been serialized in Cosmopolitan Magazine and featured in USA Today, The Wall Street Journal, and People magazine. There are over five million copies of her books in print, along with hundreds of thousands downloaded online. Reviewers have called her work “emotional and heart-wrenching.”

Created by: abookandalattee at October 10, 2017