Adriana will be awarding a $10 Amazon GC, to a randomly drawn winner via rafflecopter during the tour. Please use the RaffleCopter below to enter. Remember you may increase your chances of winning by visiting the other tour stops. You may find those locations here.

Guest Post From Adriana Kraft:
What lengths would you go to if you wanted to seduce someone? What if the woman you want to seduce is a frosty English professor older than you by at least a decade—and what if, in addition to that, you want to get her hooked up with your current lover, a brawny carpenter?
Believe it or not, that’s Meg’s plan, and there’s hardly any length she won’t go to.  She’s only twenty, and the small-town world of Burntside, Wisconsin, is her apple. She stars in the local playhouse productions – directed, it turns out, by that same frosty English professor. Her goals? Have fun, have lots of uninhibited sex, enjoy the moment, and avoid any commitments that limit her freedom. She’s convinced that hooking Cat up with Kurt will bring them pleasure and set her free to pursue her next dream somewhere far away from Burntside.
In a nutshell, that’s her motivation. Our motivation in creating her? We set out to write a romp, not worrying too much at first about depth of character or character transformation. We crafted the broad strokes of a plot in which we could deliver some of our own favorite kinds of erotic scenes. But both we and our characters discovered deeper motivations as we delved into the project.
We’ll let readers discover how Meg grows and changes across the series, which covers nearly a decade of her life. We think she may surprise you! Our goals expanded beyond delivering hot sex scenes to exploring, in this book, how both a carpenter and a professor can shed their negative assumptions about each other and revel in the things it turns out they have in common. Much of the rest of the series also focuses on destroying stereotypes and blowing up assumptions, while never losing sight of creating sizzling mind-blowing ménage scenes. We think that makes for some surprising scorching combinations.
This five book series was originally released in 2009 by a different e-publisher. It’s been unavailable for over four years, and we’re thrilled Extasy Books has contracted to re-release it, completely revised and re-edited. In the meantime, Meg insisted we write one more adventure. The six books will release approximately every ten weeks. Watch for Book Two: A Woman for Zachary in early August!
In the excerpt below, Meg’s been sunbathing nude in the back yard of the house where she rents a room from the professor, the first steps in her seduction plan.

Level headed English Professor Caitlin Shanahan has finally earned tenure and purchased the century-old two-story house of her dreams in the college town of Burntside, Wisconsin—at thirty-four, she'd better face facts: her future is teaching college and writing plays, not falling in love. So why is she so drawn to foxy little hometown actress Meghan Keenan, who's rented her upstairs apartment, or worse, to the girl's gorgeous hunk of a lover Kurt Davis, a carpenter who's never even been to college? Twenty-year-old Meg has a plan. First she'll seduce the reluctant professor, then she'll share her sexual delights with both Cat and her brawny carpenter, and when she's successfully brought them together, she can make her escape and explore what's beyond the only town she's ever lived in. Kurt can't stand the up-tight professor who's hired him to build a gazebo and refurbish her old house—the house he wanted for himself. Even if Meg’s scheme succeeds, he knows Caitlin would never look at him twice. No need to go there in his fantasies…

I'm not going to go into to much detail on this one but I absolutely LOVED Kraft's "Seducing Cat". The writing was good and the characters were awesome! I definitely give this one four stars. 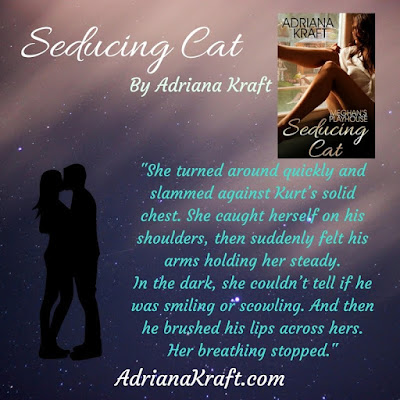 Excerpt:
Peering through shuttered eyelashes, Meg Keenan nearly purred. She’d seen the tall figure of Cat Shanahan leave the curtained window. Apparently the lanky redhead had no idea the sun struck the window in a way that showed her slim form off to nice advantage.
Meg snickered. Why else would she choose this particular time of day to come out onto the sundeck? Because the sun shining on the window exposed Cat to her view almost as much as she was exposed to Cat’s.
At least she had the woman’s attention. Meg closed her eyelids and exhaled slowly. Soon she’d have Cat’s body.
Stretching languidly, Meg smiled and sat up. Her plan was proceeding quite nicely. Kurt had been pissed she’d rented the professor’s upstairs apartment. Though Meg was quite comfortable being a townie, Kurt carried a chip on his shoulder about town-gown tensions. Was that part of why he’d never gone to college in spite of doing so well in high school? Instead, he and Jack Mobly had established a construction company. At twenty-four, Kurt had a certain amount of control over his life that Meg envied. He didn’t seem to care that there was a world outside Burntside, Wisconsin.
She, on the other hand, needed to see beyond the horizon. She hadn’t found her ticket out just yet, but she knew she’d find a way. Fortunately, they both knew that.
While she and Kurt had been lovers for two years, neither suffered under the illusion of any long-term commitments. She’d known him all her life. And they were very compatible lovers. What one partner didn’t think of, the other did, and being together meant they could enjoy their fascination with sex without having to deal with the meat market. Their relationship was one of convenience, yet quite satisfying.
But Meg was ready to leave Burntside, and she wanted Kurt to have something he didn’t even know he wanted. She wanted him to have Professor Caitlin Shanahan. And she’d given herself the assignment to make that happen.